The passion of Dr. K. V. Rao by taking part actively in promotion of young scientists has been instrumental in bringing about this Society to promote scientific temper by making learning of science experiential and thereby encourage school students and young scientists to pursue a career in science.

The Society has successfully built a solid foundation over the last 20 years through various activities. Staring with a single event of presenting one Research award to a young scientist in just one subject, the Society steadily increased the number of events to encompass all the basic sciences, not only at research level but also moved down to school level. Realizing the need to encourage the students at a young age, KVRSS initiated many events over the years for school students. Starting with one state, the erst while Andhra Pradesh, KVRSS now conducts its activities in all the southern states of India and is now ready to expand its activities pan India.

KVRSS has established as a premier non-governmental organization in promotion of science. Going forward, KVRSS plans to develop into an institution with a pool of scientists and where leading scientific work can be done and thereby establish itself as an organization par excellence in its pursuit of popularising and promoting science and extend the sphere of activities throughout India.

Our organization is totally non-profit oriented and has mainly bootstrapped by raising funds from close friends and family members of Dr. Rao. The hard and sustained work paid off and in the last couple years KVRSS has received support from many quarters. Now KVRSS has its own office, many volunteers to support and funds have started coming from individuals, corporates and funding agencies.

In its 20 years of working KVRSS has impacted more than 25000 students and with the planned extension of reach we plan to impact more than 5000 students each year. KVRSS, which has been a forum to spot talent and recognize students till 2019, has plans to expand to mentoring the students. We have already started various activities in this direction with Concept teaching in Math, then Physics.

The efforts towards mentoring were given an impetus when OCCF fund from California came forward to fund a mobile lab to cater to schools in far flung areas and some government schools. However, the project is slow in taking off due to the pandemic and government clearances. We are hopeful it shall be resolved soon.

Electronic Arts (EA) Hyderabad has come forward to support the development of an Innovation centre for supporting students to take their projects to bigger scale. The centre is being developed in our office with the fund and we are in the process of selecting projects to be funded and mentored.

Another significant development in the past couple of years has been the collaboration with education and research institutions for towards popularisation of science among students. KVRSS signed an MOU with CSIR-Indian Institute of Chemical Technology for arranging visits of students to their labs and talks by scientists of IICT at various schools. KVRSS conducted a joint event with CSIR-Centre for Cellular Molecular Biology, Hyderabad for selecting projects for Climate Change Challenge awards. KVRSS was invited to University of Hyderabad for demonstration of experiments as part of events conducted for school students during the meetings held by Indian Science Academy.

Most importantly, the eminent scientists, teachers and academicians have been part of KVRSS assessment panels, it is because of their impartial judging that the students have reposed faith in credibility of awards from KVRSS and in Research award category alone KVRSS receives more than 100 applications each year from all institutions, small and reputed.

KVRSS has been very fortunate to have very eminent scientists from reputed institutions to deliver the Annual Memorial Oration during the annual awards function. 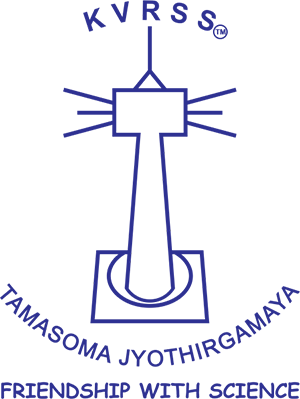 KVRSS has been serving the student community for the past 20 years in Science. The scope and quality of the contribution has been our top priority. The prime motto of the Society is to promote & popularize science. All the events of KVRSS work towards spotting the talent, recognizing and nurturing it.

The logo of KVRSS depicts a Light House with the words “Tamasoma Jyothirgamaya” indicating that the Society is dedicated to spreading light of Science in all directions and that it would unearth and bring to light the scientific talent among the students’ pool. It would be involved in shedding light on the scientific achievements of the students and participate in the popularization of science.

Be it a quiz, a research presentation, an experiment or concepts in science, it is our endeavor to bring students to our platform. The Society has been providing various opportunities for students to have a “Friendship with Science”. The society also encourages students to have fun and at the same time acquire, achieve and contribute to science. The building in which the office of the Society is housed is called “Friendship Heights” and it is appropriate that the activities conducted by the Society inspire students to reach heights in the chosen direction.